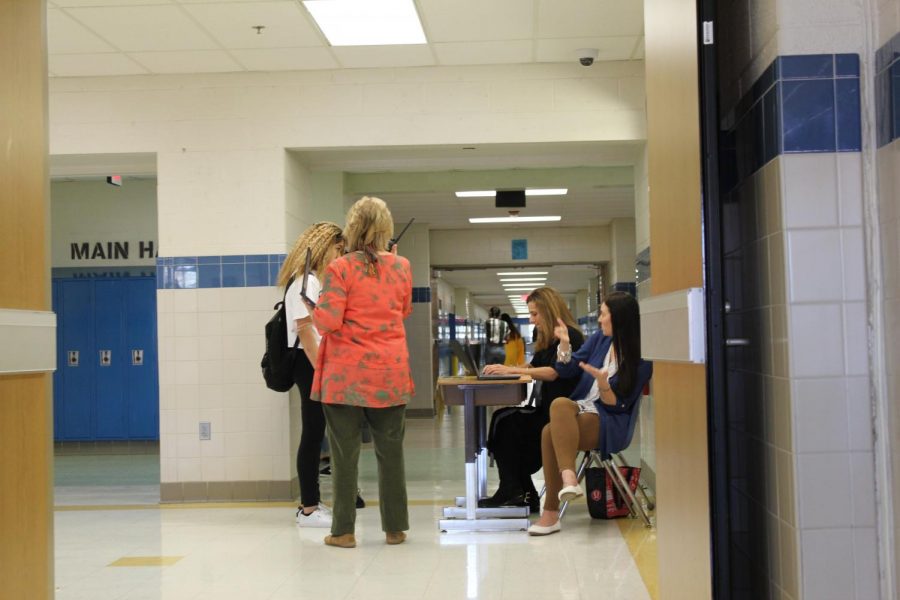 Systems of Support staff Donna Spitzer and Amy Lee as well as counselor Jennifer Rogin-Marks write out a pass for a late student.

Tardy sweeps. These two words have been the hottest topic around Lee for the past couple of weeks.

The previous comments come from Lee students disapproving of the new tardy policy.

For those of you who are still unfamiliar with the new policy, basically, when the bell rings, teachers lock their doors, forcing students who are late to go to a tardy station set up in four prominent locations, wait in line, and get a pass to class.

This ordeal was brought upon Lee High School because of our whopping average of 266 tardies a day according to assistant principal Jennifer Curry.

Curry explained the advantages of this new tardy policy. “For a lot of kids, having that extra interaction or inconvenience of going to get a pass has motivated them to plan their transitions better to get to class on time.  For students who have not made an adjustment and are still consistently tardy, it is a very easy way to quickly identify who those students are, and bring them in to meet with us and work with them individually,” Curry said.

Lee has had a problem with tardiness for years, and administrators have previously implemented various strategies to address it. Administrators took this final drastic measure in response to Fairfax County’s new policy.

FCPS has passed new standards in order for schools to be accredited, and tardy and absence rates have now become a factor. If Lee students maintained tardiness at rates witnessed earlier this year, our school could face discreditation. This would set off a domino chain of other problems.

There are many different perspectives to this solution. On one side, we have the students; on the other are teachers and administrators. But surprisingly enough we have some students who see the advantages of this new policy and teachers who see the disadvantages.

Teachers have largely been saying it really is a great improvement for the school, and they’ve noticed a positive change in transition times.

Auto tech teacher Dave Turley previously experienced a lot of students consistently arriving late to his class. “It’s kind of nice to see kids running to class, instead of seeing them walking and taking their sweet time to get here. Overall, I think [the stations] are working. I believe it is benefiting the school; it gets the kids to be a little more conscious to be in class on time,” Turley said.

But even teachers like Turley acknowledge the system isn’t perfect. “I know it’s a big ordeal for the teachers, too. We got to take extra time out of our day to sit up there,” Turley said.

Most students are opposed to the new policy. They believe it’s unfair that we get such a short amount of time to go to our classes, and if we don’t make it, we get punished by missing additional class time to report to a station and collect a pass.

Sophomore Jillian Taylor expressed her frustration about the new policy and presented a solution. “Instead of using punishment to motivate kids to get to class we should use the importance of education to get them to class instead of punishing them for people who don’t even want to go to class. I feel like I’m being punished for everyone that is consistently late to class when usually I am not late. I feel like individual punishment would be better instead of group punishment,” Taylor said.

Sophomore Tiffany Smith explains the flaws in the new policy, she believes the school doesn’t understand how this is not an easy fix. “It’s hard for people to get all the way across the school to another side upstairs or downstairs. And the halls are always crowded people are always standing there. It’s not even efficient. People are still going to be late. I would prefer if the school stopped the tardy sweeps, but at the same time no because we could get discredited,” Smith said.

Despite the opposition, students are responding by following the new policies and trying to make it to class on time.

Tardy sweeps are an unfair group punishment that has no place in a positive school community, but they are vital if we want Lee to continue to be an accredited school. Maybe a better solution would be Taylor’s suggestion.

“I think it would be more effective if [a tardy sweep] was once every month, so it would be unexpected, so people will always be expecting to have a tardy sweep, so they’re more motivated to go to class on time every single time,” Taylor said.

Ultimately, I don’t agree with how the school went about changing our tardy behavior. I believe that if they wanted us to improve our time-management skills they should try to encourage us with other incentives rather than scare us with punishments.