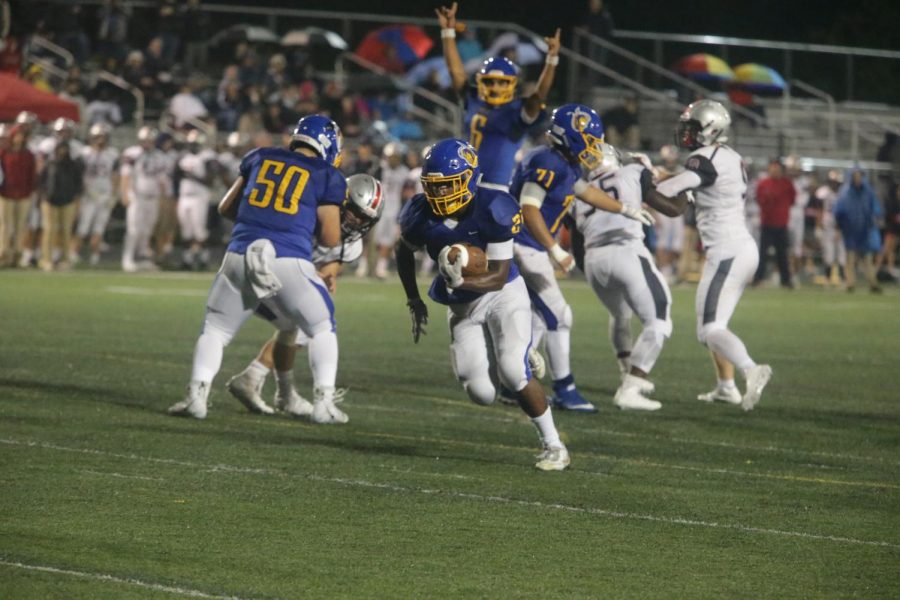 Lancers celebrate even in the face of their crushing defeat

The homecoming game was supposed to take place on September 21 against Woodson High School. However, roughly half of the team caught a severe stomach illness preventing the Lancers from playing in the game and causing the game to be postponed until the following Monday.

It began with a small group of varsity football players of eating at Outback Steakhouse after Thursday’s practice and subsequently getting sick. Then the illness quickly spread to three-fourths of the team causing the temporary cancellation of the annual homecoming game and leaving many students disappointed, angry and confused.

Senior Captain Caleb Samuels (wide-receiver) was one of the members that were the first to get an illness after dining at Outback. “I got sick to the point that I had to be hospitalized due to being dehydrated of puking so much,” Samuels said.

The origins of this illness are still uncertain. Originally the students and staff believed that the illness was caused by food poisoning at the restaurant. In the following weeks, most have agreed that it was a stomach virus-possibly stomach flu.

This cancelation not only frustrated students and staff, but it also took an immense toll on the team. Quarterback Tameem Noory was frustrated because the team had worked extremely hard to win and make it the most memorable and special game that they have played.

“Since I’m a senior, this was my last homecoming game, so I pushed my team to be able to achieve our goal of winning against Woodson,” Noory said.

Another downside was that the game was rescheduled on the following Monday, making it less likely for students to attend the game due to it being in a school night. So all the players and fans who were waiting for the game had to keep waiting until Monday. This actually had a bad effect on game turn-out, and the rainy weather hurt attendance further. The team suffered further because they went the whole weekend without practicing before Monday’s game.

Senior Srey Poek has been attending Lee High School football games her four years of high school and was extremely upset that the game was rescheduled to a Monday night.

“This was supposed to be the biggest game of the season. Fine, the players got sick and that is understandable but what I do not understand is the fact that they changed it to a rainy Monday afternoon. They could’ve moved it to the following Friday so more people could attend and not have to worry about homework,” Poek said.

Despite taking rest over the weekend, the Lancers were not at their total physically when they played against Woodson, on Monday as Noory reflected.

“The team prepared very hard, and we gave our best, but we lost that game,” Noory said.

Even though the homecoming game prevailed in spite of complications, the team still went all out and played their hearts out Monday night but they were met with a loss.

”At the end of the day, even though we lost, I feel proud of my team for trying and putting their best efforts in,” Noory said.

The Lee community was surprised but resigned about the cancelation and postponement of the Homecoming game on Friday night. Even though the game was postponed for a later date, it was still a major disappointment for the senior players, in particular, who viewed this as an athletic milestone.