Despite the importance of off-site academies, Lewis academy students miss out on class instruction and quality lunch options. 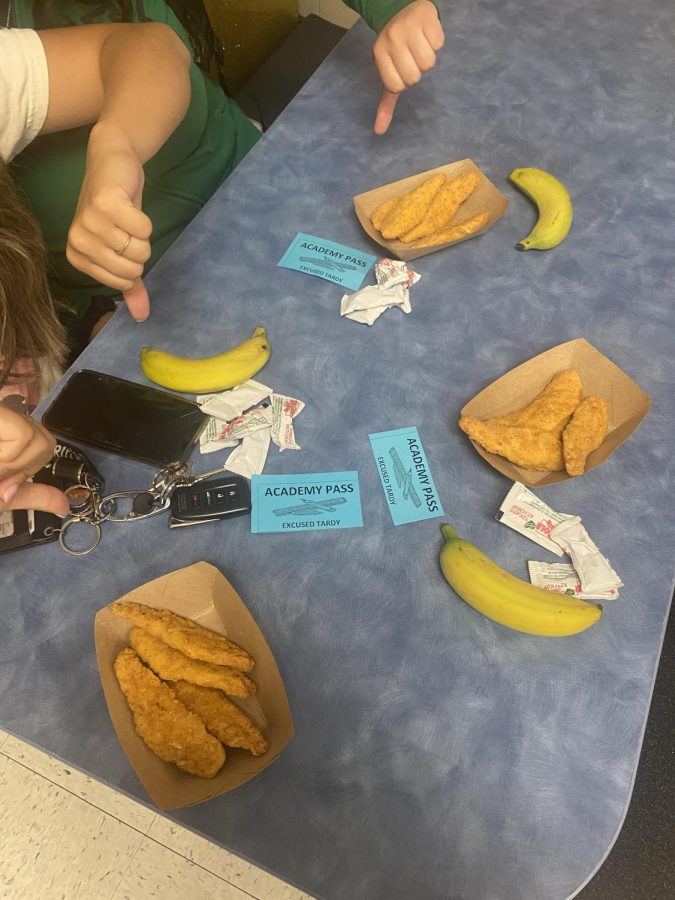 "This was all that was left:" Lewis students who travel off-campus for academy disapprove of the leftover cafeteria food.

At Lewis High School, and many other FCPS high schools, lunch is provided to all students through four sections: A, B, C, and D. All these lunches are given consecutively every thirty minutes within the third block of the school day. However, academy students, who must travel to a different school, aren’t given the same luxury of a full lunch as the rest of the students. Academy shuttles run for first, second, and third blocks. You must be wondering, “Do the shuttles arrive to pick up students at convenient times for their schedules?” The answer is no.

Students who have an academy class for the third block are put at a particular disadvantage because of the lunch times. As an academy student myself, I have found multiple obstacles in my learning due to the inconvenience of timings with shuttles, class, and lunch. According to my other third block academy peers, the timing of this academy is particularly disastrous.

Kelsey Cruz is a junior who takes Intro to Nursing at West Potomac Academy who struggles with missed classroom time.

“I think leaving early and coming late to class has definitely hurt my education because I’m either missing content or having to take more time to ask to repeat content,” Cruz said.

When leaving for academy, students must leave thirty minutes early from their Lewis class to ensure they make it on time for their academy class. Lewis academy students particularly struggle due to the lack of reliable transportation. All other schools around the county have their own shuttle to their school. However, when returning from the academy, the shuttle must again drop off Edison students first, then Lewis. Usually there is a new driver and depending on the driver the route may be longer or shorter than usual. As you can imagine, students leaving class thirty minutes early during their second block, would mean they have not entered the lunch block, and arriving late would result in missing the entire third block, which has all the lunch periods.

As an academy student myself, I have experienced multiple times, with my fellow academy classmates, coming to the lunch period late without any food for us to eat after D lunch has been completed. The fourth block begins after the last bell to ring and we are usually sitting in the cafeteria eating whatever the rest of the students at the school have left us.

For my fourth block, I had history. In history, I wasn’t always behind because thankfully my teacher would understand my tardiness and would explain to me what I have missed. But for other students, their teachers aren’t so understanding. I’ve asked another academy student what her fourth block teacher does in regards to her being late.

“Sometimes we have labs and tests which she starts right at the beginning of class, so I’d have to skip lunch in order to make it on time. I never would have time after school to make it up because of work and lacrosse. It’s too much for me to handle,” Parin said.

At Lewis High school, we have an after school “snack pack.” It’s mainly for student athletes who need some food in their system before a practice or game. Everyday I watch these teachers try to give away as many snack packs as they can, as asked by their administrators, because they have so many more to come in. The snack packs start distribution in the main gym lobby and Christina Lugo, Coach of Varsity Field hockey and Assistant Coach of Varsity basketball, travels through the halls to the Auxiliary gym with the snack cart calling out for kids to grab a snack. It’s a great way for the athletes to eat or drink something so that they are properly satiated.

It turns out that these challenges are unique to Lewis. Students from other schools that come to my academy class either return to their base school on time for lunch, they eat lunch beforehand because their cafeteria is open all day, or they receive snack packs to take on the go.

Learning this makes me wonder, why can’t we take the unwanted snack packs to academy students? This would benefit us in more ways than can be imagined. This would ensure that academy students are ready for class because they have eaten and are ready to retain more knowledge. They will be ready for the next class without having to stop by the cafeteria for scraps of food and sacrificing time out of learning by being late.

Lewis High School should better accommodate academy students and make the shift much easier as it’s already affecting them negatively in their education and wellness.